A reception for East Anglia region commercial agents was held on Friday 13th October, 2017, by developer Jaynic to officially launch its 2m sq ft Suffolk Park business, distribution and manufacturing project in Bury St Edmunds that included a tour of the park followed by a full English breakfast at nearby Ravenwood Hall and a prize draw.

36 East Anglia agents from around the region including Norwich, Yarmouth, Lowestoft, Colchester and Cambridge attended the event. The winner of the prize draw was John Birchall of Fenn Wright in Ipswich who won a ‘goliath’ (4 litres) of sloe gin, with runners up Patrick Stanton of Bidwells in Cambridge and Mark Kohler of Merrifields in Bury St Edmunds winning 2 litre (?) bottles and all attendees receiving miniatures of sloe gin to prepare them for the winter cold.

Simon Wilson, Jaynic’s Suffolk Park, project director, said: “We had a tremendous turnout from the regional agents and received really positive feedback about the scheme with all the agents really excited that Suffolk Park is now being delivered.the Agents were impressed to see that work had already commenced on delivering the key infrastructure to allow early delivery of units to occupiers’ requirements”

Suffolk Park has already got off to a tremendous start with the sale of 10-acres to local major employer Treatt at the beginning of 2017 and the commencement of infra-structure construction works that started in October. Also, Rougham Tower Road linking the park directly to nearby Junction 45 of the A14 has just opened and a reserved matters application was recently submitted for two distribution units totalling 350,000 sq ft.

Wilson commented: “Jaynic’s proactive approach opening up the park will enable early development of the whole site for a range of uses from 2,000 sq ft to 750,000 sq ft far faster than competing sites in the Region,” he added. 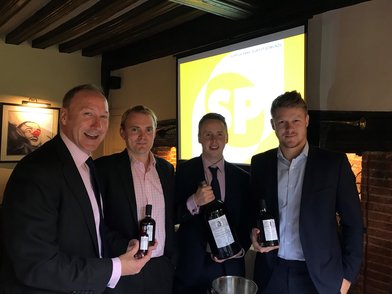