A larger school was urgently required to serve the densely populated surrounding area, and a strong connection between the school and the local community was also an important prerequisite. Design challenges were thrown up by the school’s positioning on a steeply sloping site, the need to create space for many more pupils, and the fact that work had to be undertaken safely while the school remained in operation.

One of the building’s most dramatic design features is an internal “canyon” in the centre of the building, which cascades down over four floors, working with the site’s steep topography. The canyon is the hub of the school with classrooms opening out onto it, ensuring there is a strong visual link throughout the four floors bringing all year groups together.

The design of the building has contributed to an ‘outstanding’ OFSTED report in November 2015.

Head teacher Rupinder Bansil highlights the following design facets that have added to the quality of the learning environment:

Neill Werner, head of architecture at Pellings commented: “A largely glazed roof means natural light pours down through the canyon, ensuring that even the depths of the school on the first floor benefit from daylight. It also creates a circulation function encouraging free movement throughout the school for teachers and pupils without the need for corridors. In addition, the canyon provides specialist teaching areas with far reaching views and dramatic top-lit central multi-use space.”

Due to the steep topography the school’s main entrance is accessed via a bridge that spans the gradient and links to the main entrance. The bridge is linked to a public, landscaped piazza that acts as a meeting place for parents and children. Although the bridge can be closed outside of school hours, the piazza is fully accessible to the public for use at all times, enhancing the school’s links with the local community.

Externally every inch of space is utilised – existing grass banks that previously had little function were removed and turned into an amphitheatre for arts performances. Classrooms open out onto roof decks that are used for external teaching, and have sweeping views of London’s City Airport. A “discovery trail” runs through the school’s grounds, which has been carefully designed to provide a variety of learning environments for pupils.

Intensive consultation with staff and governors was an intrinsic part of the design development, where design potential was fully explored as a tool to meeting site challenges. An open-minded approach adopted by the senior management team greatly contributed to the successful outcome.  Community engagement was also critical, generating a true sense of ownership for local residents and parents.

The school was unable to close while construction work was undertaken, so it remained in full occupation while the existing school was demolished and rebuilt. Ian Collins at Pellings who was in charge of contract administration on the project explains this was achieved via a two phased approach to the work. “The first phase saw half the new school being built on existing free space – once this was completed children and teachers were immediately moved into the new space, while the existing school was demolished. We also installed and moved temporary classrooms around the site to suit construction as it progressed,” comments Collins.

He says there was continued liaison with teachers, to ensure that lessons and the people living in the many homes close to the site were not disturbed by construction work. Importance was also given to making sure site separation was given due regard for noise and safety reasons, maintaining safe emergency escape routes, and maximising demolition work outside of school hours.

The school’s BREEAM Excellent rating has been achieved via intensive use of energy efficient features such as green roofs, PV panels, rain water recycling and passive stack ventilation.

The Royal Borough of Greenwich was the client. Pellings was the architect, town planner, interior designer and contracts administrator, the structural engineer was Gledsdale Associates Ltd and the mechanical and electrical engineer was Bailey Associates. 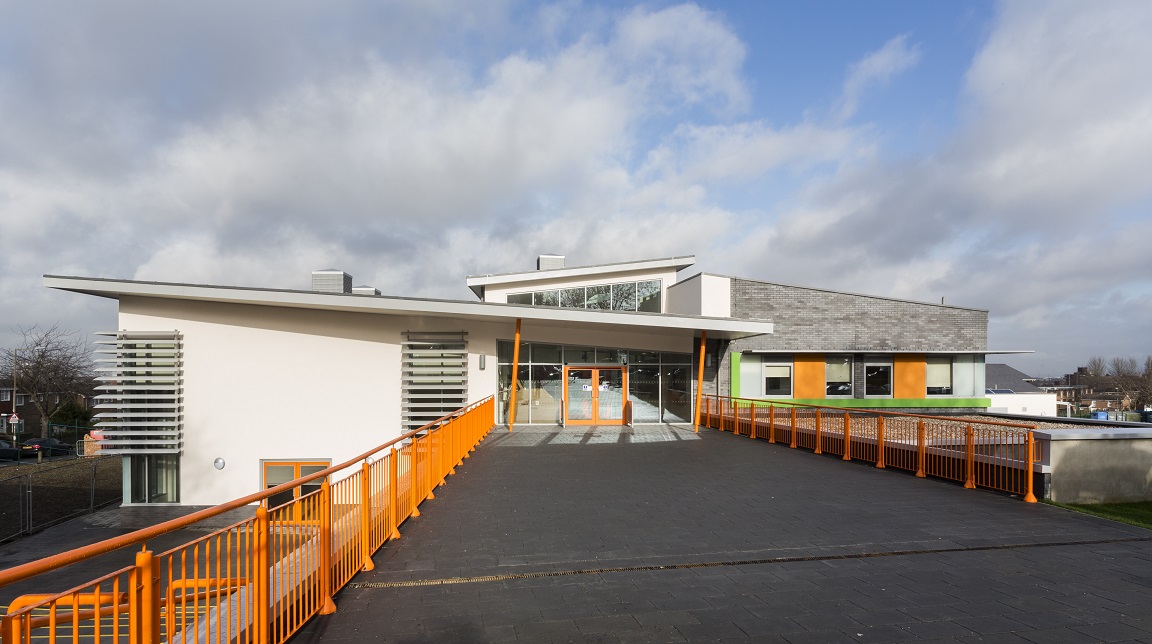