The St Clement’s Heights alms house residents have recently moved into their new supported living apartments which were financed by the sale of the 6-acre site to Crest Nicholson that has developed a further 26 apartments and 20 townhouses for private sale.

The project was initiated by St Clement Danes Holborn Estate Charity in 2010 who instructed Pellings to undertake a stock condition survey. It was quickly established that the alms house flats had reached the end of their economic life and as bedsits were very unattractive to future residents.

Pellings was further instructed to look at the redevelopment potential of the site and concluded that the existing buildings although in a conservation area were of little architectural merit, that there was low site density on the 6-acre site and that it was in an area of high property values making a redevelopment of the site viable.

The alms house charity was advised by Pellings that if a suitable planning permission could be achieved it would be possible to sell part of the site for private housing with the land sale proceeds paying for the new alms houses.

Neill Werner, Partner/Head of Architecture at Pellings, says: “we worked closely with Crest Nicholson to produce a masterplan that integrates contemporary buildings with the surrounding landscape. The project was designed to meet the often-differing needs of both social housing providers and private developers while still delivering the number of homes established by the outline permission achieved by Pellings in 2013.”

Werner adds: “Detailed consultation with the alms house residents took place using the Construction Industry Council’s Design Quality Indicator empowering the residents as stakeholders to be pro-actively involved through structured workshops and online tools to ensure design quality. In this way residents were able to influence the design and finishes of their flats including the kitchens and bathrooms, as well as the common parts. At the same time, clear lines of communication were established so that residents and their families knew who to contact if they had queries on the development and needed reassurance on any aspect,” he concludes.

Equally important was local community engagement which played a vital part in shaping the final design of the project. The neighbouring residents and the influential Sydenham Society were fully consulted and expressed their views on the massing and height of the buildings as well as the external materials. As a result, the ground floor car park was repositioned to basement level, enabling the residential blocks to be reduced from five to four stories.

A third of the steeply sloping site was designated as an area of high ecological value, restricting the development footprint to the high plateau. This required a careful balance between the built form and the natural surroundings.

The scheme design focused around a formal communal garden, with the alms house at its head and the private dwellings lining the three remaining sides. The main alms house building is configured to embrace its own private courtyard garden for the enjoyment of the elderly residents alone, while the rest of the site is accessible to all, including the general public.

Through careful phasing, the new alms houses were developed before the existing buildings were demolished, enabling residents to immediately move into their new accommodation.

“Place making was at the forefront of our design process” says Werner. “The alms houses were developed to HAPPI and London Design Guide standards. St Clement’s Heights creates social cohesion with its communal gardens and viewing areas, yet the design configuration addresses the individual needs of the scheme’s different users. Each building on the site has a relationship both with the formal landscape at the heart of the site and the leafy edges of the tree-lined boundaries, with tremendous views as far as the Weald of Kent and the City of London” 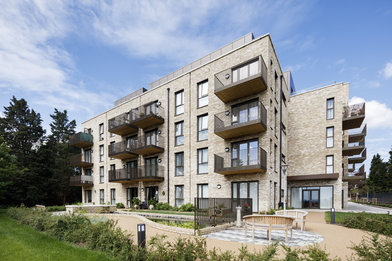